A new report commissioned by the Minerals Council of Australia states that the Australian mining industry will need an additional 90,000 workers by 2020 to keep up with demand in the growing industry. The report said that increasing skilled migration is one step towards achieving this goal.


Due to the minerals and energy requirements of India and China, Australia is expected to make it through largely unaffected the recent uncertainty in global financial markets resulting from the slump in the United States housing market.

"We are confident we are three years into a 'super cycle' of global demand for our products - a decade and more of sustained demand - which some consider could even last twenty years," said Minerals Council Chief Executive Mitchell H. Hooke.

"The report found that more than half the growth in jobs will occur in Western Australia, Queensland's minerals industry labour force will grow by 50 percent and South Australia's demand for minerals workers will more than double", Hooke added.

Skilled migration is seen as an important source of employees for the mining industry. Mining professions, among many other occupations, are listed on Australia's Skilled Occupation List, for which the government grants permanent visas under its General Skilled Migration program.

Achieving the Permanent residency status is the number one agenda of every international student or prospective migrants wanting to come to Australia.

I was one such international student who arrived in Australia on the 2nd of Feb, 2005 and became a permanent resident on the 28th of May 2008. I had to go through a painful, stressful and outrageously expensive process , though, I think there was also a less expensive way to do so.

Any how, what is done is done. Let me narrate my story in pictures and words. Hope the readers are able to make a much better decision and learn from my experiences.

Offer of admission from UTS

I was offered a letter of offer from UTS some where in Nov 2004. I quickly started the procedure for the final grant of a student visa to Australia. Paying the tuition fees, performing medical check ups, blah blah.

Finally after filling out all the forms, submitting all the documents requested, I was finally granted the visa. 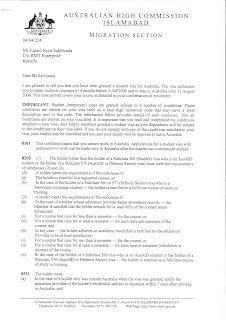 Letter of grant of visa from the Australian High Commission, Islamabad, Pakistan


Unlike previous times, I was not interviewed for the visa. The visa was sent stamped on my passport and sent to the offices of my educational consultant. 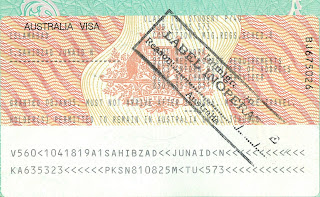 Original Student visa as stamped on my passport. The label has been stamped inoperable on expiry.

Studying while searching for work and getting blue collar jobs such as filling shelves in super markets, washing cars and delivering pizzas was some thing I had never done before.

After a lot of struggle, hard work, patience and determination, I was finally able to finish my studies from UTS 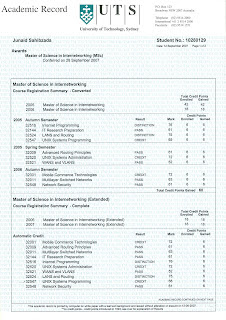 Page one of my UTS transcript 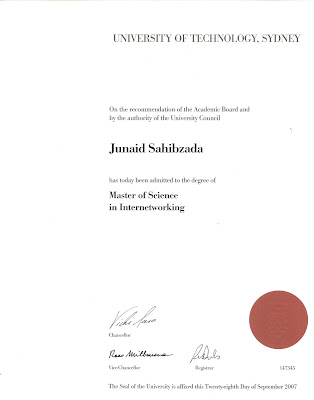 I applied for Permanent residency on the 27th of Sept, 2007. After appearing in the IELTS exam for three times, I was able to achieve a score of

in the exam because of which I was able to claim the extra bonus points. 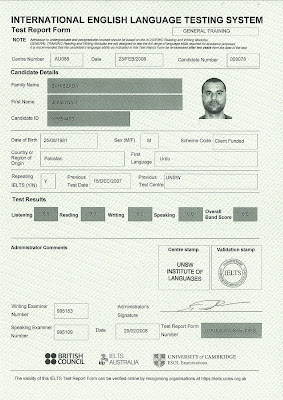 Copy of my IELTS report.

Finally on the 28th of May, after waiting for almost eight months , I was awarded the permanent residency. 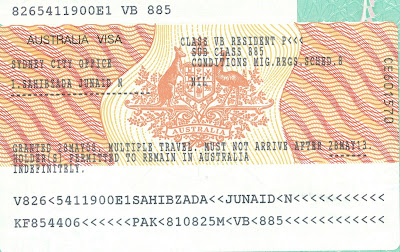 Stamp of permanent residency on my passport.

End of story!
Posted by Junaid Noor at 9:44 AM 26 comments: Links to this post

Thats me from Sydney

Followers of Live and Work in Australia